Review. Margaret Thatcher, The Iron Lady: Or The futility of Power. 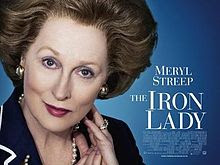 "And on the pedestal these words appear --
"My name is Ozymandias, king of kings:
Look on my works, ye Mighty, and despair!"
Nothing beside remains. Round the decay
Of that colossal wreck, boundless and bare
The lone and level sands stretch far away.' Ozymandias: Percy Bysshe Shelley

Back in 1974, when I was probably to young to, I saw Roman Polanski's  "China Town". While there is much to remember from this film -  an excellent cinematic experience, dealing with a number of different subjects -  one of things that oddly stuck with me for many years was the fact that the provision of domestic water  in the USA was run by private companies. That a corporate entity might make a profit from providing such a basic necessity  as water seemed somehow repugnant and out and out mercenary. So much so,  that after seeing the film I had to check that it was correct.


Move forward to 2013 and I would suspect that a younger generation might not understand why I found that somewhat distressing. This is just one of Thatcher's legacies. Another, perhaps even more relevant now, is the credit card - or indeed accepted notions of domestic credit in general. Again, when I was younger, taking any form of loan was something one might do,  but you kept it secret. You certainly would not have flaunted it. There was, in the UK, something of a social stigma about needing to borrow money. Move forward to Thatchers 80's and such notions seemed to disappear overnight. Not only did people not hide any loans that they might have but "having good credit", and more importantly proving so,  became something of a mark of economic, and in some places social, acceptance. People opened their wallets and an ever increasing series of credit cards would be proudly displayed. Credit card not enough? What about a Gold Card, or a Platinum card.? You don't have one? Oh dear what on earth could be the matter with your "credit rating"?


These are just two of many more legacies left to the world by Thatcher, Reagan and working partner Murdoch. For better or worse - the final decision is yours - Thatcher changed the UK into what it is today and her legacy can still be clearly felt - right up to and beyond, the international money markets collapse in 2008. It would thus seem impossible for a combination of director and writer making a film about Thatcher to not address these issues. However, this is exactly what script writer  Abi Morgan and director Phyllida Lloyd have somehow managed to do. What both are interested in, a story told many times and far more effectively, is the ultimate futility of the desire for power.

Oh yes, it deals with other issues: feminism, dementia, maybe even love, but these are all  superficially dealt with or remain hangers upon which to place its major theme. Indeed, so desperate is it to underline its one single thought that it will happily distort the past to prove its point. Did you know, for example,  that without fault, (although Norman Tebbit remains conspicuous by his absence) Thatcher's cabinet were in favour of social equality, high taxation of the "rich" and against cuts in welfare spending? No, well they were according to Lloyd's film. Thatcher was the sole voice, her  Milton Friedman dominated economic policies hers alone, while she battled against a party and cabinet so liberal, "wishy washy" and troubled by social inequality it remains a mystery why they did not sit on the same benches as the two Dave's (Steele and Owen).

The story is told in flashback from the present day, with Thatcher struggling with dementia and haunted, literally, by the ghost of her deceased husband Denis . Her favourite son, Mark, having moved to South Africa and never visiting, seems to have abandoned her (either that or he is lost in the desert again) . Indeed, ultimately even the ghost of Denis leaves her. All really the result of her relentless search for power - its lonely at the top you see. Many of these flashback sequences are told with a combination of  newly filmed footage and the last resort of the low-budget movie,  archive footage (maybe it had spent its entire budget to get Meryl Streep to wear enough prosthetics to make Anthony Hopkins moan in Sacha Gervasi's  Hitchcock).

And while on the subject of  Meryl Streep  both her and and  Jim Broadbent, are few of the only redeeming features of this movie, even if both must act their little hearts out through the aforementioned prosthetics. A fine performance from both.

Apart from being so determined to tell a story that could have been better told using a different life, Phyllida Lloyd's greatest crime to the cinematic form is to produce a movie that looks, in the main,  like a late-night Channel 4 or BBC 3 TV movie rather than a true cinematic experience. The archive footage does not help.

"You have always been alone" says the ghost of Thatcher's husband as he finally leaves her. Yes! Yes Phyllida Lloyd! We get  it! A lesson admittedly hard won by some. Its tough at the top. "Power" is ultimately useless, we should simply spend time with our loved ones and life's a bitch and then you die. Shelly told us this and in only 6 lines.