Cowboys and Aliens: Or how I learned to stop worrying and look for the Wagner references 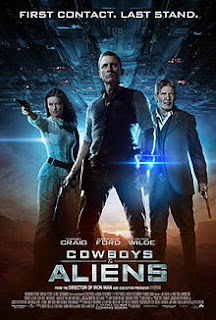 The bankers destroyed the world . Inhumane, soulless demons. Working deep within the earth - out of sight, out of mind. They raped the land and stole the gold -  while hypnotising you. "Everything is fine" they made you believe. "Nothing to see here". But not everyone. No sirree. Because there were some, like you, who - while not fully understanding the "demonic" nature of the "great manipulators" -  benefited from participation with them. Or at least you did until their unthinking, unemotional lust for gold turned on you too. Yeah, there was clearly something-up. Don't pretend you didn't know something was wrong because you did - didn't you?. Oh, most of us might have been totally hoodwinked but you? Well you knew it all along didn't you? Deep down? You may have ignored it, pushed it to the back of your mind, but there was something up - wasn't there? But not to worry because there is still time for you to redeem yourself. Time to awake. You can turn your gaze on the Nibelungen, see through their manipulations, wake the sleeping masses,  redeem the world and return the gold to the Rhinemaidens  You may need the help of the god like powers of Siegfried and Brunnhilde to do so but you will - and without you even they are nothing

And thus we have the plot (or at least subplot) of Cowboys and Aliens, an entertaining if confused, episodic and ultimately disappointing movie that, while owing much to Richard Wagner's Ring of the Nibelungen opera cycle (or at least a Marxist reading of said work  - either consciously or unconsciously)  and the recent economic "meltdown", is ultimately only saved by much of its cast - especially Harrison Ford.


It starts well enough, with Daniel Craig (the movies Siegfried) arriving from nowhere and thankfully looking less like a steroid addicted Sid James then he has in the new Bond movies. I had fears of Carry On Cowboy - see video below - but had no need to worry as he puts in an enjoyable, if somewhat shallow, performance. He's a man with no name, no memory, the fastest gun in the west, and of unknown motives. And he wears a rather strange bracelet that helps provide him the means to help detect, and ultimately defeat, the aliens. So far so, if we ignore the bracelet, Sergio Leone. But this is a movie of mixed sub genres and influences and when he arrives at a local "one horse" town we are, if alas far to briefly, entering the "wild West" of Fred Zinnemann's High Noon or Howard Hawks's Rio Bravo (the director cites John Ford and Sergio Leone as influences). And of course in keeping with such movies, this is "old" "Hollywood's rather clean, rather sanitised version of the West -  that most "new westerns" have reacted against. But despite this, it remains the movies best "chapter" and it is a pity the (many, many - far to many) screenwriters decided to branch out from here. We are quickly introduced to the rest of the cast, including the central figures of Harrison Ford as the wealthy cattleman of dubious ethics (he needs Wagnerian redemption - but will he manage it?), and the mysterious traveler of Olivia Wilde (the movies Brunnhilde); a generally fine supporting cast and possibly some of the most boring, shallow, CGI aliens to appear in a big budget movie in a long time.

Quickly the aliens appear, kidnap a series of local residents (for reasons that make no sense) and a "quest" movie begins. Daniel Graig's character seeks to find out who he is and his obvious relationship to the aliens, Harrison Ford's odious rancher seeks to win back his equally odious abducted son and Olivia Wilds "mysterious" character has motives of her own - but these might prove too great, if rapidly obvious, a spoiler to reveal.

And of course along the way, both Daniel Greg's Man with No Name,  and Harrison Ford's "Evil Rancher" will gain redemption - whether they want it or not.

The movie throws Wagner references at us by the dozen - or at least I think it does. Daniel Graig is Siegfried, his bracelet a cross between Siegfried's sword Nothung and the Ring (indeed there are hints at the end he may not be entirely human - if you look); Olivia Wilde is Brunnhilde - she even "awakens" returning to our world emerging from a ring of fire -  her fate to redeem the world is ultimately  Brunhnhilde's; the aliens are the Nibelungen   living deep underground, fearful of the light and with an unsatisfiable need for gold.


While enjoyable, the movie itself is ultimately let down by a screenplay with so many many holes - an illogical episodic mess - that no director could save. So disjointed are its various "chapters" that it feels as if it was originally written as a series of TV episodes (it wasn't) It may have been written by a series of screenwriters of known talent but together they seem to have lost the ability to produce a cohesive story. When you have script written by, count them, 5 writers, from a story written by 4,  you end up with a story by committee whose members had very different ideas and seemed incapable of merging them successfully. If only, more than workmen like director Jonathan Kolia (of whose work I am not normally hardly a fan - Elf, Iron Man 2, etc) had had the guts to take the screenplay and edit it himself into a cohesive story. Alas, in an  interview he seems to suggest the opposite, "It was very well laid out, well planned, and there were a lot of discussions with a lot of actors who called me to task on things that seemed too convenient, so we made sure we earned each step". So there you go, a committee of 6 screenwriters and 4 original writers, to which we must add a committee of actors. How one wishes for a true Auteur.

If only the movie had stayed truer to the influences of John Ford or Howard Hawks's Rio Bravo and remained a character study locked in a small town. And if you think this idea would not have worked than I can assure it already has. In 2009 Syfy released the low budget TV movie "High Plains Invaders" which examined the Alien/Cowboys themes with oddly greater success - if alas, without any Wagner references.

Maybe with the inevitable - if lower budget - sequel? Drop the committee but keep the Wagner  - please?