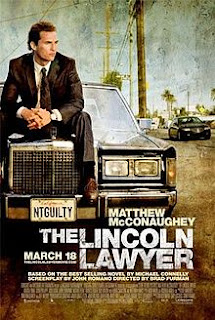 Finding just one of the following things in a movie is likely to provide solid evidence that it's not going to be very good: a film based on one of those books that fill the stands at train stations (who the hell does read Andy McNab and considers his output either literature or even readable anyway?) , a handheld camera operated by an infant who has just had a sugar overdose and can't keep bloody still (it's one, - although far from the only - reason I dislike Dogme 95 so much), or if it stars Matthew McConaughey (all Romcoms should be taken out and shot - humanely or not I really don't care.) Imagine then my surprise to find, right from the opening credits, a film containing all three that was not only good, but worth more than one run through

The Lincoln Lawyer, (directed by Brad Furman - who now sits firmly on my "to watch list") is a thriller, perhaps a sort of "neo-neo-noir", and the best film that Michael Mann  never directed - either in the 80's or 90's. By this I mean it is "old fashioned Hollywood entertainment" but entertainment dense in characterization that is echoed across a large cast of of characters . And these are people that have conversations, long conversations that actually make some sense within the logic of the movie and to which you not only really need to listen to but more importantly want to listen to. Oh, don't get me wrong, there is - should you need such a thing, and who doesn't  occasionally - suspense, "action" and "twists and turns" but most importantly it is a "grown-up",  movie for adults that is "talky" but not in away that is desperately trying to win "best picture" (its no Lincoln - forgive the reference)


Matthew McConaughey (at the best I have ever seen him. Perhaps he is simply aging well. Either that or he is getting to old for romcom cinema goers - whoever they might be - and feels the need to up his game a bit) plays Los Angeles County criminal defense attorney Mickey Haller. Haler runs his business out of of his black Lincoln Town Car (hence the title). Not the most ethical of attorneys, Haller, who specializes in defending clearly guilty criminals of various types - including the members of a local motercycle gang - is not above conning his clients out of more money then needed. When his driver Earl (Laurence Mason), notes at one part, after he has successfully convinced the aforementioned motorcycle gang to pay him an extra $10, 000 for something he has no intention of doing, "You know what? You would've done all right on the streets. " Haller replies " Shit. Where do you think I am, Earl? "


Its better than its trailer would suggest by the way

Going around his usual daily routine of bribing court bailiffs and bail bondsmen (putting them on his Christmas list as he describes it), he happens across the case of Louis Roulet (Ryan Phillippe), a Beverly Hills playboy who is accused of the brutal beating of prostitute Reggie Campo.

Haller believes the wide eyed and fresh faced Roulet when he tells him he is innocent - having simply been at the wrong place at the wrong time. And sets out to defend a case he believes will be easy but quickly grows into the sort of story found in the best novels of  Dashiell Hammett - or perhaps more accurately Jim Thomson. He may even find some sort of ""moral redemption" along the way - maybe

Matthew McConaughey is supported with the sort of quality supporting casts rarely found in a big studio movie nowadays. This includes LA itself which is shot beautifully and atmospherically by Lukas Ettlin. - despite the irritating, and irrationally occasional use of a shaky handheld camera .

Scriptwriter John Romano, takes the best seller by Michael Connelly and one suspects turns it into a far better story than the one he found. He certainly does a wonderful job of tying together a large cast of apparently unrelated characters  even if I am far from convinced about the final revelation.

The score, provided by Cliff Martinez adds just the right amount of atmosphere but is somewhat overshadowed by a soundtrack that more than ably uses the music of Bobby Bland (who's "Aint No Love In The Heart Of The City" sets the tone during the opening tile sequence)", Citizen Cope, Gang Star, etc (The full sound track can be heard below)

Actually, listen to the soundtrack, pour a class of Southern Comfort and then sit down and watch this movie - would ya? Your life may not be changed but for 119 minutes you may start to believe that Hollywood can once again produce "Hollywood" movies, that simply wish to entertain,  for grown-ups.